A 'Brite' Future With Team GB

A huge congratulations to Joanne Tristram and her dog Brite who have qualified to compete with Team GB at this year’s European Open in the Netherlands.

Jo is a seasoned competitor and has been competing in agility for 13 years. During this time, she has been fortunate to compete in all major national finals and has competed internationally on numerous occasions. Brite, a 4-year-old Border Collie, is slightly newer to the circuit having been competing for just 18 months. Brite started her career out in the lower grades and has now worked her way up to Grade 7. We have sponsored Jo for 7 years meaning that Brite has been powered by Burns her whole life.

“Brite is a super little dog who has a brilliant work ethic but is like a cat at home.” says Jo “She is usually curled up asleep! She particularly enjoyed visiting The Burns stand at Crufts After being part of the winning ‘Large Agility’ team this year. She loves to be fussed!”

Jo and Brite were selected to join the GB squad as a development pairing after they were spotted for their international potential whilst competing against other top-level dogs, who were also on the squad. They had such good results that not only were they selected as team members, but Jo was also selected as a team captain.

When they get to the Netherlands Jo and Brite will have a few days to acclimatise but then it is down to the hard work. Brite will have to undertake lots of training sessions to get her used to the equipment and climate, then off to vet checks before the big competition.

The European Opens will kick off with an opening ceremony then the competing begins. Day one will give them the opportunity to show off their skills as a team. Day two is all about how they compete individually and if these both go well, they will head to the finals for both team and individual.

We want to wish Jo and Brite the best of luck for the European Opens and we just know that they will succeed. Everything is better when you’re powered by Burns. 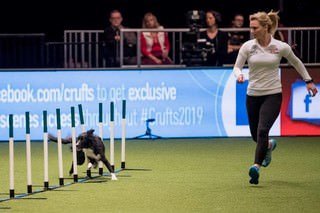