I’ve just had the sad news that we have lost two of our Burns By your Side volunteer dogs.  Kim has lost Toby, the Goldie and Teresa has lost Takoda, the cockapoo.  Difficult times for us all.

This morning I’m listening to Kodaline, an Irish band. I’d hadn’t heard of them until I happened to visit Malahide Castle, Dublin just as a concert where they were headlining was just about to start.

This morning, a government spokesman announced that Boris Johnson is ‘stable, comfortable and in good spirits.’  Is this the same spokesman who told us that Boris was doing well, one hour before he was rushed to hospital intensive care?  Only asking.

Questions are being asked in the media about who is in charge in government.  Dominic Raab, (see above, for it was he) seems to be, but John Crace reminds us today in the Guardian that Raab was, only a few months ago, fifth in line for leadership of the Tory party.  Time for a Government of National Unity? Step forward Sir Keir Starmer, a barrister with a forensic mind, trustworthy, able to focus on detail and act on the evidence, qualities which are conspicuously absent from this government.

The British Veterinary Association (BVA) is advising cat owners to keep their cats indoors if possible due to a possible risk of cats transferring coronavirus to humans.

STOP PRESS That was on the BBC on Wednesday morning.  But there’s been a “clarification” by the BVA.  The advice only applies to households with coronavirus and where people were “self-isolating”.  I thought we all were self- isolating apart from essential services. It’s not clear what has changed here.  Did the BBC misinterpret or did the BVA change its advice?

My TV automatically takes me to BBC Wales but occasionally I look at BBC Scotland in case I might be missing something.  Last night I watched a programme called Scotland – Contains Strong Language, presented by beautiful Scottish actor Cora Bissett.  Essentially the programme was about how people (especially Scottish) swear a lot but the media, especially the BBC does not reflect that.

A nostalgic moment for me was when the camera floated over Glasgow showing the street where I used to live.  Park Terrace, Kelvingrove, has student residence Maclay Hall looking over Kelvingrove Park to the University and Kelvin Hall.  I was Hall President for a year in 1970, the only time I was ever elected for anything! 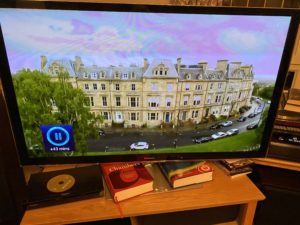 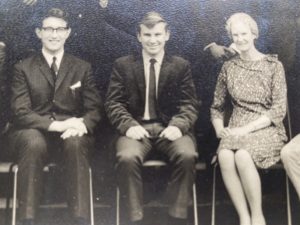