They say it’s a bank holiday weekend but you wouldn’t know it. It’s blowing a gale and I’m sitting writing while listening to Pink Floyd, The Division Bell from 1994. Wonderful.

Many years ago, I saw a report that businesses which connected to their communities were more likely to survive than those which didn’t. Surveys regularly announce that consumers prefer to do business with companies which have an ethical dimension. Great, that has always suited me.

Over the 27 years of Burns Pet Nutrition, I’ve tried to follow those principles. A few years ago, I took that to a new level, with a dedicated community team and a raft of community-based projects. Last year Burns put several hundred thousand pounds into our Charitable Foundation. It’s displayed on our bags. On a recent visit to a pet shop (before the lockdown, I hasten to add), the proprietor said, ‘Why not reduce the price of the food instead?’  What do you customers of Burns think? Cheaper food or charitable and community support?

Here’s a word you might not know: popinjay. It means a dandy or a fop, a conceited person or one who dresses extravagantly.  The word came to mind when thinking about Boris Johnson. Not because he’s a smart dresser, although his amoral reputation suggests he is a quick dresser. His dishevelled appearance is an affectation, part of his intellectual property.

I was thinking more of the original meaning of popinjay, that is, a parrot used for target practice. (Not sure if the parrot was real or a model).  His performance in the highest office in the land, a role for which he is manifestly unfit, just cries out to be targeted. In that respect he’s the gift that keeps on giving. He’s so unsuited to being a leader it just can’t be real, can it?

In the House of Commons this week, Boris’ vigorous and cloth-eared justification for charging immigrant NHS workers for using the NHS was that it raised £900 million a year. The true number is about one tenth of that. He just makes it up as he goes along. Now I’m happy to accept that politicians, like the rest of us are entitled to change their minds, although they never admit it. But his monumental about-turn next day was a quick realisation of how wrong he was about the public mood. This was one case where bashing foreigners just wasn’t on.

In my garden I spotted the Great Spotted Woodpecker, back after several weeks of absence, loading up at my peanut feeder.  There are always plenty of goldfinches; this morning I counted seven but I have seen 13 at one time, although hard to count as they were moving so fast. Chaffinch, sparrow, siskin (which I mistakenly thought were greenfinch).

A wood pigeon patrols underneath the feeders mopping up the spillage. Jackdaws take turns hanging on and pecking frantically at the peanuts although I think they expend more energy than they get from their efforts. The little birds don’t mind them although they’re frightened of magpies which I chase off if I can. I hate them. I could watch all day.

Visitors to this parish may remember I recently mentioned my wonderful crop of dandelions. I saw a goldfinch flatten a dandelion stem, stand on it to hold it down then methodically strip out the seeds in the dandelion head. Let’s hear it for the dandelions! 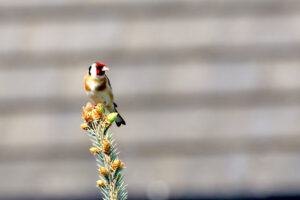 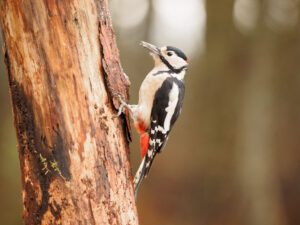 A sparrow sits in a bush most of the day and gives out about I don’t know what. I was sitting in the garden while on the phone and the person I was speaking to commented on the noise.  [Recording of sparrow below]

This made me think of Gordon MacCrae’s priceless rendition of the Wee Cock Sparrow [Youtube].

My last epistle from this parish mentioned how Boris Johnson sets himself as an easy target. Before that came hot off the press, he’s done it again! But this time he’s excelled himself. He emerged from hiding and attempted to justify the transgressions of his boss Dominic Cummings.

First instance in history of the Prime Minister taking the flak for an advisor rather than the adviser taking it for the Prime Minister. (Note for pedants: Both spellings of adviser/advisor are correct.) His rules only apply to the little people, not those in power. Funny when Cummings projects himself as anti-elitist.

A poll this morning indicates that 52% of the population think Cummings should be sacked. Only 52%? An interviewee on Radio 4 said there was a sharp difference between Brexit Remainers and Leavers – 66% of Remainers said he should go but only 44% of Leavers. I suppose this just shows how flexible we humans are about right and wrong.

I remember this from my school days. I had a lurcher (neither particularly wise nor lean) at the time and we would go after a hare. I’m pleased to say I’ve grown up and can’t even understand why anyone would want to kill animals for sport. I don’t know if this was the first time the expression in the last line of the poem entered the language. I love the way he phrases it here, “What’s lost upon the roundabouts, we pulls up on the swings.”

It was early last September nigh to Framlin’am-on-Sea,
An’ ’twas Fair-day come to-morrow, an’ the time was after tea,
An’ I met a painted caravan adown a dusty lane,
A Pharaoh with his waggons comin’ jolt an’ creak an’ strain;
A cheery cove an’ sunburnt, bold o’ eye and wrinkled up,
An’ beside him on the splashboard sat a brindled tarrier pup,
An’ a lurcher wise as Solomon an’ lean as fiddle-strings
Was joggin’ in the dust along ‘is roundabouts and swings.

“Goo’-day,” said ‘e; “Goo’-day,” said I; “an’ ‘ow d’you find things go,
An’ what’s the chance o’ millions when you runs a travellin’ show?”
“I find,” said ‘e, “things very much as ‘ow I’ve always found,
For mostly they goes up and down or else goes round and round.”
Said ‘e, “The job’s the very spit o’ what it always were,
It’s bread and bacon mostly when the dog don’t catch a ‘are;
But lookin’ at it broad, an’ while it ain’t no merchant king’s,
What’s lost upon the roundabouts we pulls up on the swings!”

“Goo’ luck,” said ‘e; “Goo’ luck,” said I; “you’ve put it past a doubt;
An’ keep that lurcher on the road, the gamekeepers is out.”
‘E thumped upon the footboard an’ ‘e lumbered on again
To meet a gold-dust sunset down the owl-light in the lane;
An’ the moon she climbed the ‘azels, while a night-jar seemed to spin
That Pharaoh’s wisdom o’er again, ‘is sooth of lose-and-win;
For “up an’ down an’ round,” said ‘e, “goes all appointed things,
An’ losses on the roundabouts means profits on the swings!”